Home Who are we ?

The Nouvelle-Aquitaine region, located in the south-west of France, has become, after the territorial reorganisation in 2016, the largest region in France with more than 84,000 km2. It is home to nearly 6 million inhabitants, has 720 km of coastline and is the leading region in terms of agriculture and wood as well as photovoltaic production.

In 2011, the Aquitaine Regional Council decided, in view of the lack of information on the effects of climate change at local level, to set up an Intergovernmental Panel on Climate Change (IPCC) type committee. The aim was to assess the available information that could help to better understand the impacts of climate change in the region and to anticipate the associated adaptation needs. The task was entrusted to Hervé Le Treut, a former IPCC member and climatologist at Sorbonne Université, and the C2A group (Climate Change in Aquitaine) was launched with one main objective: to produce a report that could focus and summarise studies on climate change, while maintaining a close link with other issues, such as biodiversity, ecosystems or economic activities. More than 170 researchers from different disciplines from the academic community of the Aquitaine region as well as from research organisations contributed voluntarily to 15 themes, each with a dedicated coordinator. In 2013, the report “The impacts of climate change in Aquitaine” was published and presented at public meetings to stakeholders from society and the territory. It is important to mention that this approach was the first of its kind in France.

In 2015 the French government voted for territorial restructuring, the region was faced with a major change: a merger of three regions to become the Nouvelle-Aquitaine. New territories, new landscapes, new issues, new challenges. In order to overcome them, the Regional Council renewed its confidence in this committee, renamed AcclimaTerra.

Thus at the time, more than 240 researchers and volunteer contributors were mobilised to produce another report that could harmonise knowledge on climate change information for the entire region. In June 2018, the report “Anticipating climate change in Nouvelle-Aquitaine. To guide policy at local level” was published. The aim of this work was to show how climate change will affect the territory and to provide a diagnosis as well as recommendations that could help decision-making in a wide range of areas.

A summary of this report has been published so that the information presented is accessible to as many people as possible. 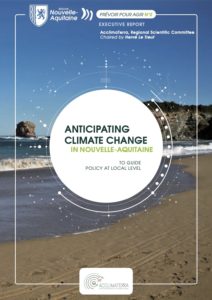 In 2020, this executive report has been translated into English (download here) with a view to sharing what may be one of the most important results of our studies: the systemic nature of regional evolution, and therefore the systemic diagnosis necessary to manage the territories concerned in a coherent manner. The regional system is complex: it gives rise to issues as different as the management of water resources, vulnerable areas (urban, coastal, mountainous), economic activities (agricultural or industrial), biodiversity conservation, energy production, health… It is indeed necessary to consider the different changes that can occur in a region such as the Nouvelle-Aquitaine in a global way, and to see how they overlap to describe the climatic and environmental evolution of this region as that of a complex, heterogeneous but interdependent system.

This is, of course, a learning process, which is necessary in every region of the world – but which will manifest itself differently in each case. We hope that the experience of Nouvelle-Aquitaine will be a useful reference for further studies. AcclimaTerra is continuing its activity and is widely open to cooperation with foreign partners.